The poet and philosopher Lucrezio describes the Nature of Things with a surprising attention for the explanation of phenomena.
His Latin poem discloses the reality of the cosmos and humanity with precursory contents of the modern science.
De rerum natura is a work devoted to the union and disunity of atoms, the vastness of the space, the temporal development, the intellect, the human core from birth to decline. The work gives a vibrant and vivide glaze on natural things in order to describe the infinite mutation of the world and the cyclical regeneration.
This orbital revolution stokes the desire for movement of six bodies, connected by a hidden and hot blooded thought.
An anatomical draw flows from the articulation of the gesture and spreads throughout the thinnest parts of the body, penetrating from the epitelium to the bones. The bodies are connected in a scenic composition where the construction, the distribution of the elements and the relation between correlation and interdependence create an organic and breathable totality.

"The last show starts at midnight. It's inevitable: the eyes begin to close but the pièce De Rerum Natura signed by Nicola Galli, a young choreographer from Ferrara (Italy), is the most substantial show of the first day of Festival Civitanova Danza 2017.
[...] Elegance and charm emerge in the youth bodies of the Junior Tuscany Ballet. Nicola Galli guides six interpreters with a strong synthesis presenting the phenomena described in Lurezio's De Rerum Natura.
The bodies feel like insects crawling on the ground, water, wind that shakes and disrupts, and then part of a cosmos in constant evolution (beautiful duets with great suppleness) and finally observers of the transformation of the body in light through the use of rotating neon lights dancing in the darkness."

"The pièce De rerum natura signed by Nicola Galli (seen at Teatro Petrarca, Arezzo) it's a proof of maturity, sensitivity, temperament and quality of language.
[...] An atlas of flora and fauna, of organic and breathing substance, materializes in the fluid and powerful bodies of the performers, in harmony with a musical beating. In the anatomical articulation of their bodies, the dancers show a continuous mutation in progress: from the amorphous insects and creeping reptiles born from a backdrop to the upright position; from the liquid gestures to the winged one, to the shapeless forms shaken by breezes and vibrations, while waves of sounds and natural noises shape the abstract bodies.
The dancers swing in various directions, explore the space creating postures and extending the arms and legs like trees in the rural playfulness of short runs, hops and rolling. Those young bodies still observe their changes and the surrounding landscape when the backdrop collapses showing the nudity of the stage. An unexplored world.
The sidereal sounds followed by a crackling of burning matter, give way to the vocal purity of the 'Madrigale to a sweet nightingale' by Adriano Banchieri while the bodies observe the 'dance' of three neon bar that, falling from above, in the dark, create geometries up to become a mystical enchanting monolith."


"De rerum natura is a fluid interpenetration of narration and choreography, in which Nicola Galli translates suggestions and reflections drawn from Lucretius’ work into a refined, rigorous, concentrated and captivating choreography." 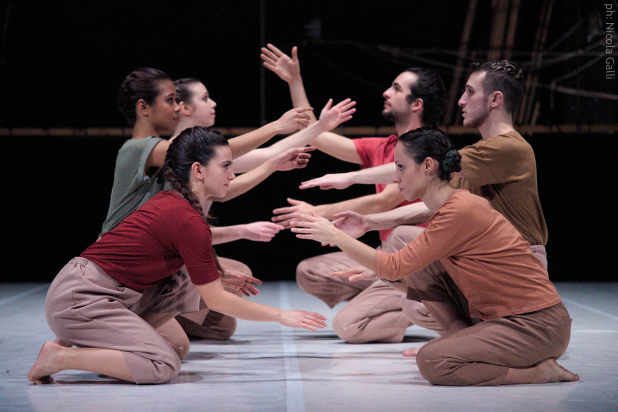 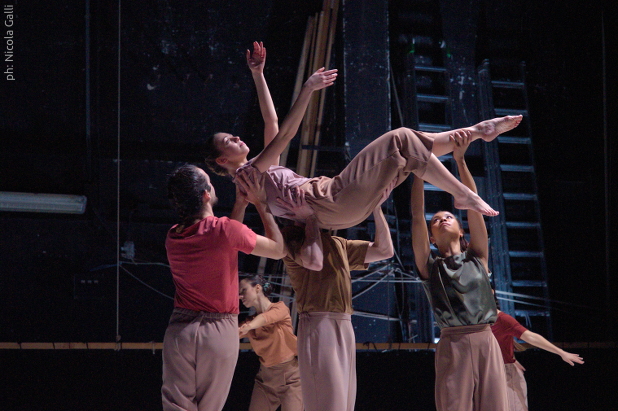