JUPITER AND BEYOND is the first episode of Nicola Galli's choreographic research dedicated to solar system, in particular to the planet Jupiter.

The creation is inspired by "2001: A Space Odyssey" directed by Stanley Kubrick and gives thought to the ancient and indissoluble link between human, time and space. It offers a magnetic and desolate landscape immersed in silence, micro-polyphonic flows and classical harmonies.
The bodies inscribes the space drawing a network of trajectories that mutate from square to circle: two geometries related to human proportion in according to Vitruvius thought.
A man dawns from the darkness and moves in a square space that frames him. He soars in the static nature of this tailored shape, involving a principle of terrestrial order.
A thin and vertical line, projected upward, represents the peak of the angolar movement and introduces three bodies that draw curves and sinuous shapes, floating towards a celestial direction: the circle.
JUPITER AND BEYOND probes the metamorphosis of the shapes, creating a far imaginary that approach to a comparison with the mysterious human destiny. 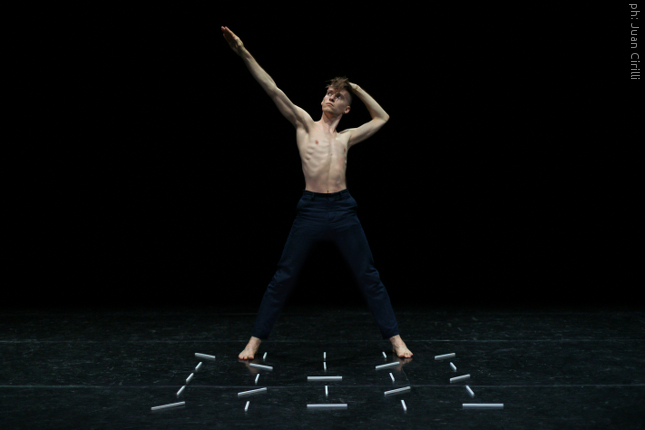 "[...] The beginning of Beyond must be deciphered as the continuation of a discourse centered on the graphic sign and its manipulation. A white line, taken to a point, is slowly lifted from the ground, almost pulled, and then returns to its original groove to be grab again. A white fluid and flat line gets stiff as the arm of a compass and probes the three-dimensional space in all directions. Seems to attend to the "metamorphosis of the vacuum", formula used by Galli to define his project on the liquidity and the presence, to a process of development and evolution that shape the straight line and submit it to a bending for reach a final circle. This creation includes the result of the artistic route drawn by Galli, the arrival point of a gradual dematerialization of the geometric figure, specifically the square.
After adopting the square figure in the previous works, for first the cube, then a bubble wrap frame in "O / proiezione dell'architettura ossea" and light square in "Jupiter", where contemplates the overlap of the square and the circle, with "Beyond" we arrives in the Bézier curve. The broken lines are materialized in white sticks and used as directions of movement by three performers in the previous fragment; now the lines are reunited and pushed upwards thanks to the movement of three female dancers which create through Vitruvian triangulation a spherical conglomerated and a circular draw according to a method of accumulation and multiplication.
The scientific thought of Galli's poetry outline an imperturbable microcosm, as if the creation was placed on a glass case, in an aseptic environment, in a rarefied space far from the audience placed in front of the stage, with a central view as the artist wants. To create the sound context were taken the music of the film "2001: A Space Odyssey", that together the namesake novel of Arthur Clarke represented for the artist from Ferrara also a point of inspiration for the dramaturgical construction, in particular the stable and slow rhythm and the circularity of the scenes." 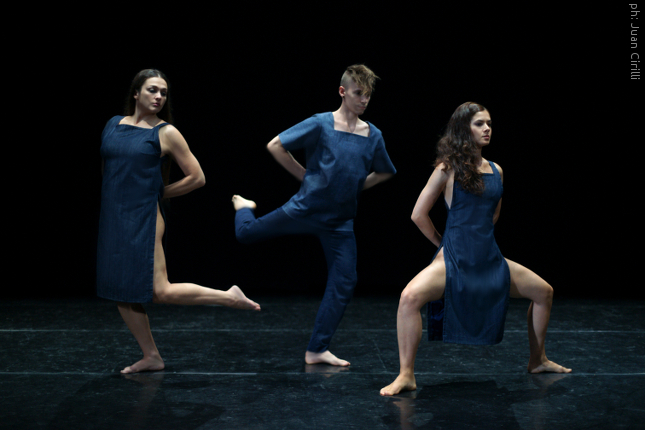 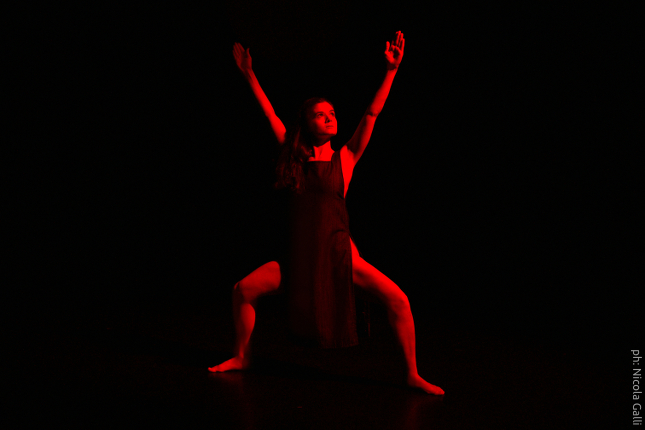 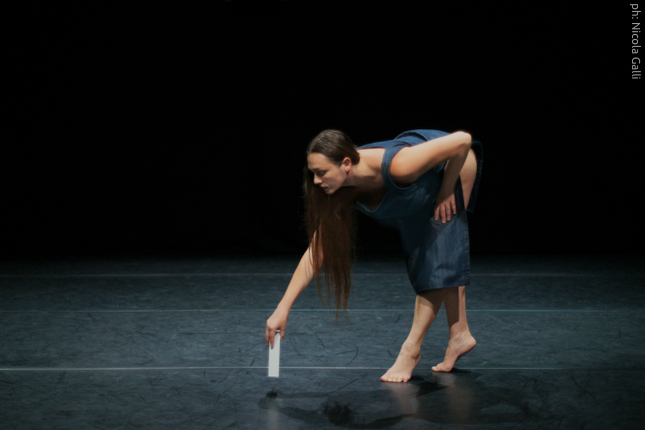