VENUS is the second episode of Nicola Galli's choreographic research focused on the solar system.

The astronomical and iconographic imaginary of VENUS evokes the approach of man to the forbidding planet Venus, characterized by a volcanic and acid atmosphere.
Two human figures land on it and introduce a sequence of gestures through the execution – distant as well as meticulous – of some gymnastic and ballet-tradition exercises, drawing vectors and lines.
Their presence upsets Venus' atmosphere: the movement of the two strangers is scanned by elements that, falling on the ground, suspend the action and call to order.
The two figures proceed weaving a sinuous and curvy drawing to achieve a possible quiet. A discharge of water breaks up the illusory harmony, destroying their curiosity and triggering a last wild attempt of defense.
Once defeated, they contemplate Earth, majestic and central in the celestial panorama, covertly craving to come home. 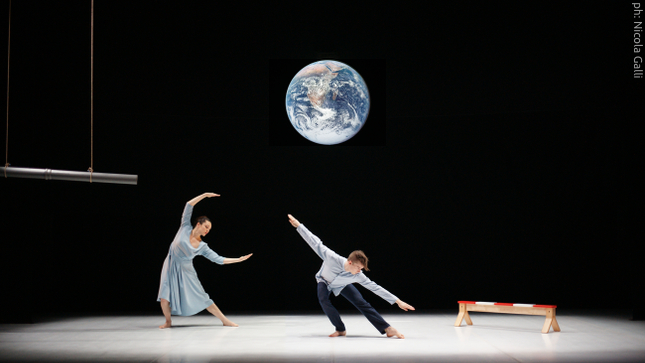 "He has a vast imagination that has been guided in theatrical devices, giving value to strong aesthetic developments. This is Nicola Galli who in the extract from Venus gave life to atmospheres and suggestions inspired by the homonymous planet of the solar system.
Under the terrestrial globe takes place a dialogue between a winding and agile ephebe, the author himself Galli, and a delicate and mature female figure, the interpreter Alessandra Fabbri, in which their linear, rhythmic and pleasant movement oscillate between celestial properties of the planet and earthly influences."


"Nicola Galli has visionary and a bizarre mind, and each of his artistic projects is a journey into another world, or rather would say, planet.
In Venus he is on stage with a mature woman, his dance teacher Alessandra Fabbri.
They are creatures landed on Venus - a planet inhabited only by a swedish beam and a grey tube which little balls run inside -, presumably in search of quiet. The two figures realize soon that they desire a return to Earth, whose image is projected on the backdrop.
The temporal distance between them insinuates in the piece a filial and incestuous crasis, which disorients the audience and keeps the whole performance on thin ice. This also happens for the setting and the costumes that suggest at the same time a piece by Graham and Charmatz (ie modern and postodern).
Intriguing although hermetically inscrutable."


"With her delicate and, at the same time, mature femininity, Alessandra Fabbri dominates the beginning of the pièce; her movement is characterized by poses that call to mind ancient statues and make expression of the planet itself.
Raised as the Goddess Venus, her character is accompanied by an ephebic Nicola Galli, who is transformed into a young adept worried to cheer her and sweeten the difficult permanence on the planet, making her smile through dances similar to games of children.
The nostalgia for the Earth, which image is projected to the backdrop from the beginning of the piece, however, blocks the fluidity of the movements, complicating the simplicity of their relationship, up to make them more like a new Adam and Eve, yearning to leave this sort of extra-terrestrial paradise." 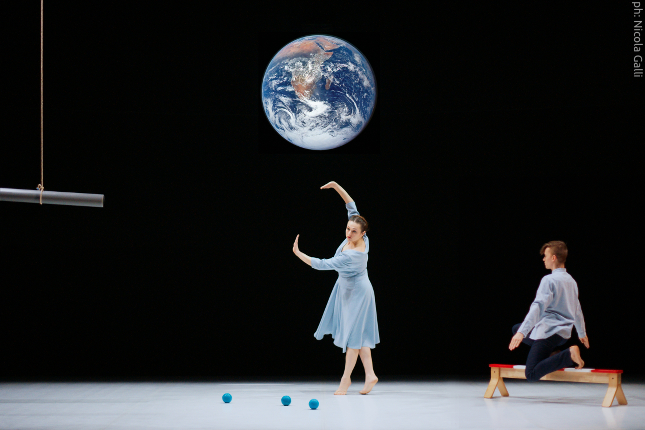 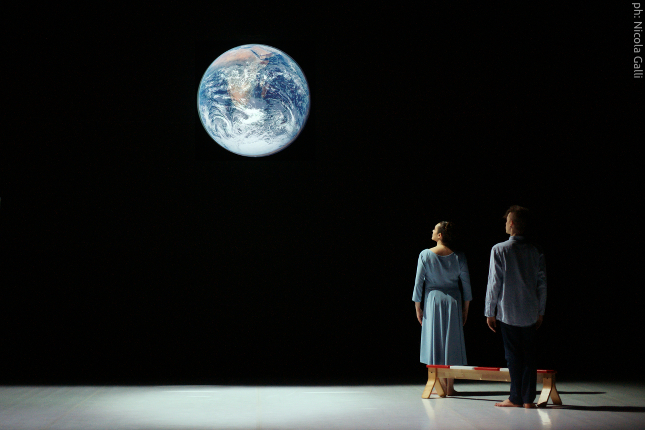 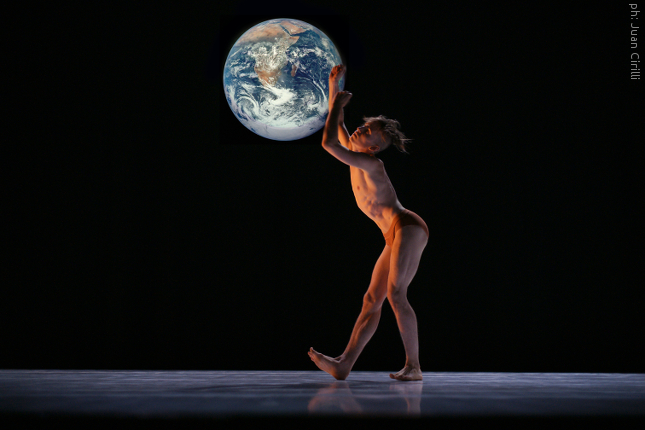