O | proiezione dell'architettura ossea is a short performance part of the MDV project, with the body installation prime visioni sottocutanee and the exhibition OSSO.
The performer dances on a square platform moving the individual joints from maximum articular extension to the flexion.
The white and square space, analyzed according to the study of human proportion and natural development of the logarithmic spiral, is interpreted in its simplicity: a static geometry characterized by the repetition of four equal corners and sides.
The body draws segments and figures that marks the soft surface covered with bubble wrap, through his weight during the action. The continuous passage to the ground of the perfomer releases a graphic and sound residue, accelerating the future vision of the endoskeleton. 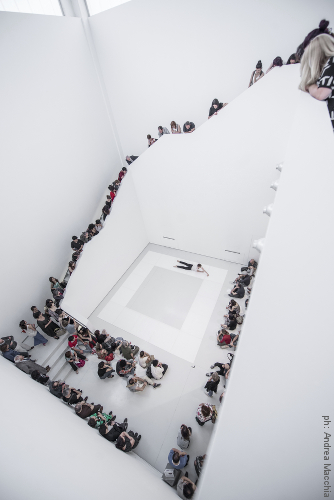 [...] O | proiezione dell'architettura ossea performed by Nicola Galli could be defined a practical and analytical explication of the movement of the human body. An analytical dance is, to quote the words of the illustrious American researcher Sally Banes, a kind of dance that call attention to the movement and to the physical activity almost scientific. The reference in this case is literally, because the absence of an external sound score is filled by the "internal", produced by the natural execution of the movement, by the motoric excursions that tend to show no more or less than the material of which we are made, and the internal relations between the full and the empty; between the liquid and the air, the muscles and joints.
In a sort fo preamble, Nicola Galli, in fact, isolates and executes in turn the movement of the head, hands, elbows. Simple and essential these gestures do not pass 'unnoticed' at our listening, each producing its noise without the need of amplification. Pure sound of joints in motion. The same sound, then, is reproduced, rather, "projected" to the ground when the body begins to draw on the surface full of bubbles clear, precise and geometric choreographic figures, millimetrically calculated in the space, but who can also melt in moments more fluidly related.
Otherwise, it's not only the body from the inside that creates the sounds, but they are produced by the outbreak of air bubbles.
Nicola Galli sculpts the space around him with great rigor, carefully checking the muscle tension while dancing on and with the floor. We can hear, calculate - and even visualize if we want, after the performance - each centimeter of the surface crossed by his weight."

"[...] Galli creates an operation of scarification of the body, eliminating progressive layers, from the epidermal to the muscle, in order to arrive to the skeletal structure and probe with surgical precision its potential. This is a process that proceeds from the borders of the body to its internal structure in order to render it rich, bring it out and realize a visual translation in the outer space. We participate to a system that contemplates on the performing project a synergy between empty and full, inside and outside, density and absence.
[...] The performer adopts a choreographic material, borrowed from his gymnast training, scanned in structuring and de-structuring parceling of the limbs and torso, and in an aseptic but tensive stasis; a choreographic material destined to leave an echo. This echo, as a mode of orientation and visualization of the skeletal structure into the space, is recognized both in the sound, produced by the performative act on the bubble wrap and naturally amplified by the room of Opificio Telecom Italia, and in the graphic trace, highlighted by the compressed air cells exploded.
[...] At the end of the performance the bubble wrap exploded seems to be echoed in the t-shirt of the performer covered with small and unlimited holes.." 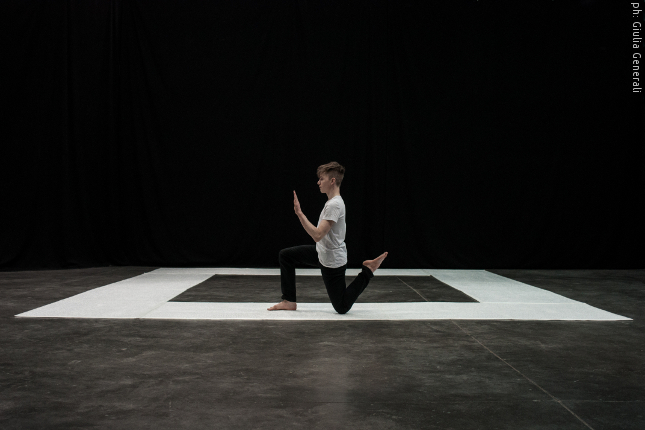 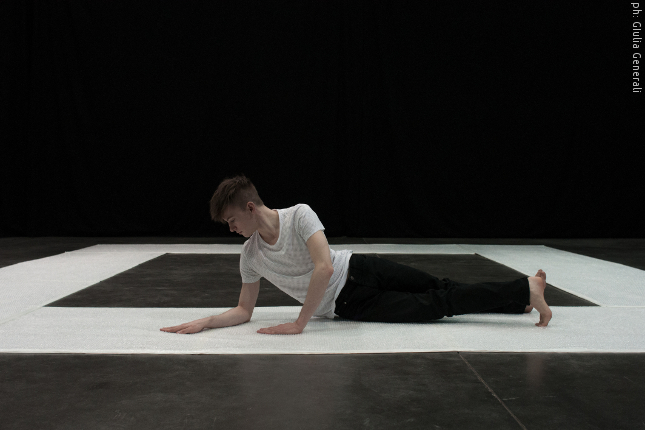